I went on a 36 hour water fast and here's what happened...

“Who’s with me?” read the tailed of a caption I scrolled through on my Instagram feed.

“I guess I’m in too.” It was a passive thought, yet somehow I uttered the words to no one.

I looked at the time. It was 9:59 exact and the 36 hour cleanse was set to begin at midnight and last all through Tuesday noon o’clock.

“I’ve got time,” I thought while, I’ll admit, crushing a bag of Doritos. (Balance guys).

At the moment, I was nowhere near hungry and the thought of giving up food sounded easy. But it wasn’t until I told someone else that it began to feel real.

There was no turning back now.

And so here’s how it went:

My breakfast usually consists of hot tea or coffee after guzzling water immediately after opening my eyes; occasionally fruit or a chickpea omelette thing that I’m obsessed with. I say this all to say, I felt no pain in just drinking water that morning.

E-mails and calls galore. Someone give me my assistant back.

Hour long waits and bullshit policies. I could feel frustration building—frustration that normally would be subsided with a chickpea omelette thing.

Breath in. Breath out.

“There are people who have it worse right now,” I thought to myself before reciting some of my daily affirmations:

And I was. I got through my e-mails and calls without being rude to anyone or having an emotional breakdown.

It’s been tradition to virtually work out with my sisters through this quarantine so that’s what we did. At around 5:15 we gathered around our phones or computers and broke a sweat. I felt good, thought I’ll admit moments prior I was starting to lose my shit all over again. How did I get over it? I guzzled a bottle of water.

The idea of not being able to eat dinner post workout frightened me, but I got through it. So what now?

Remembering my good friend, Bobby’s advice—”just drink water and stretch”—I set up shop on my balcony to move some more, stretch and try to get into a yoga pose I’d seen on the gram earlier that day. Here are some of the final results. 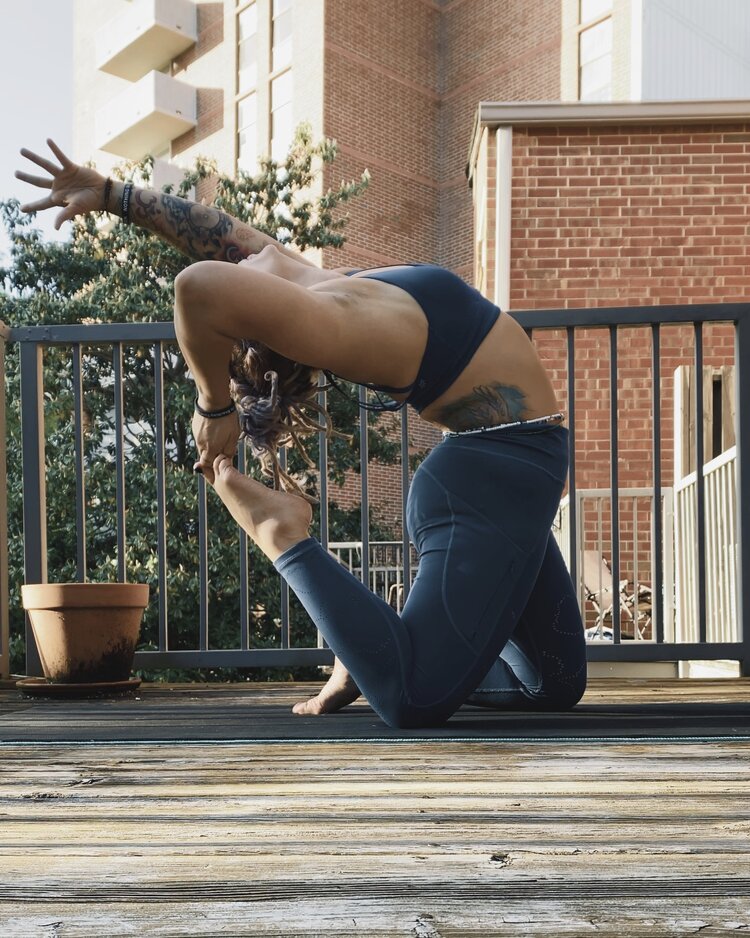 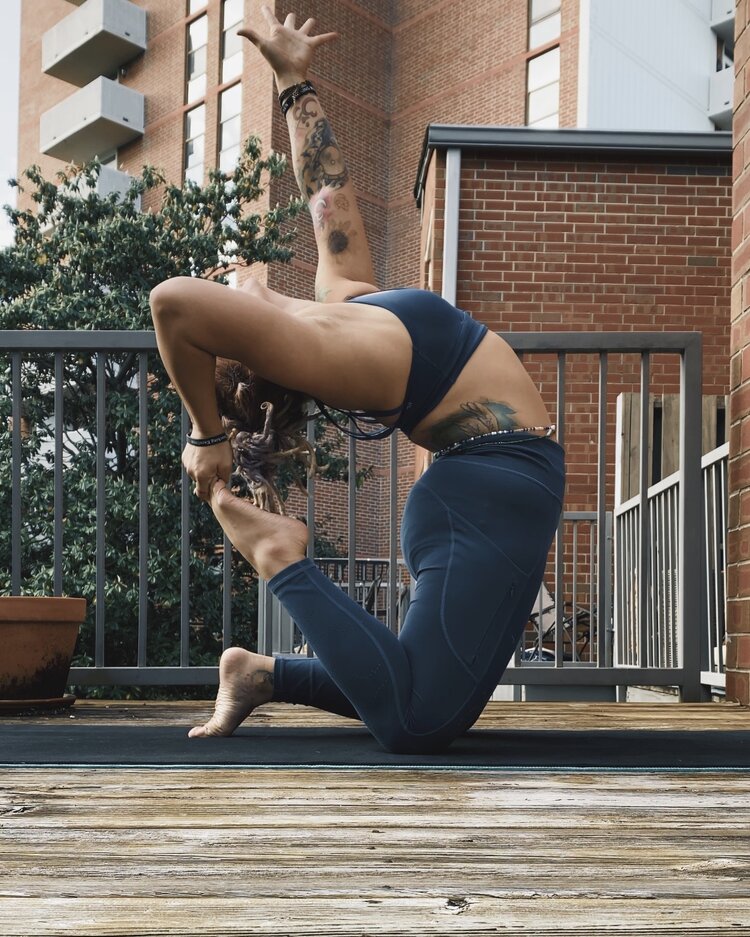 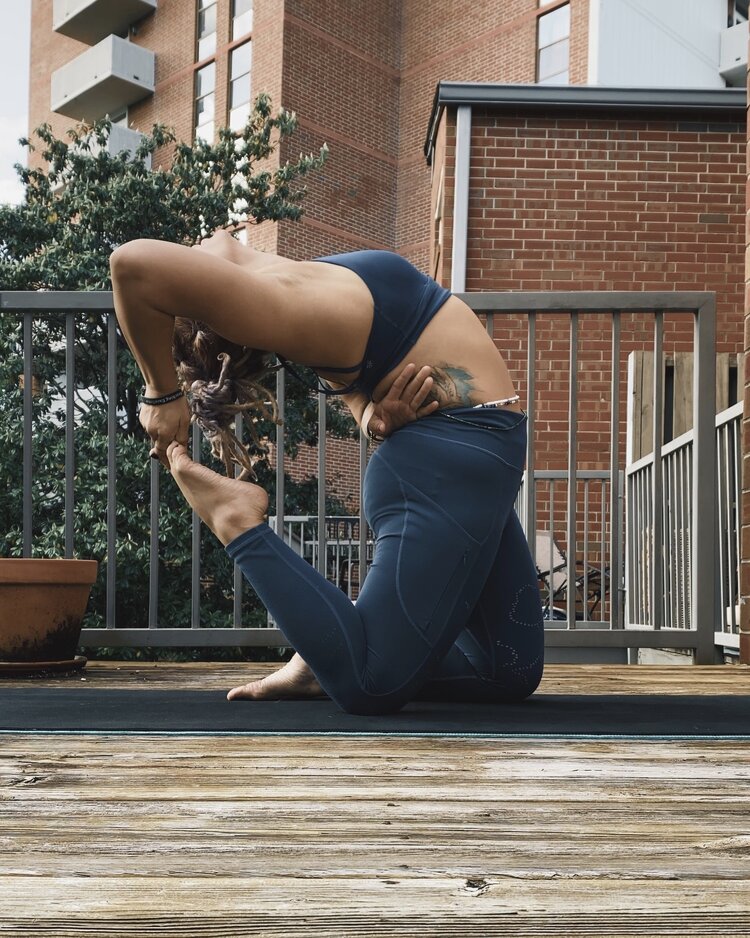 “See it through, don’t stop now,” these were more words from my friend Bobby (also known as @doctorholistic). They echoed in my head as shit got realer. I was hungry guys.. miserable even. Tired and weak. And again too hungry to sleep. So much for my foolproof I’ll just get to bed early plan.

“Just drink water,” I thought to myself as I grabbed another bottle.

The problem here was that now I had to pee like a race horse and so sleep, for now, was out of the question.

Netflix? Nah. Though, I’ll admit, I tried. I just couldn’t focus. Rather, it’s not what I wanted to focus on.

Even in the midst of my privileged turmoil, I felt inspired in a different way; motivated even. Yes I felt physically weak, but mentally tough af. I became hopeful, full of faith, happy.

It wasn’t too long before I passed out after penning some thoughts down, while listening to Jorja Smith and burning Palo Santo.

I woke up to a text that read “3 more hours!” It was from Bobby, and man if you’re reading this THANK YOU. This man has been nothing but a gem in my life. Which brings me to the point of keeping, not only like minds, but kind minds near you. This man has subtly pushed me in ways he probably has no idea he has. Please do check him out if you have the gift of time.

Back to my morning though..

The time is not 11:35 am which means I’ve got less than 30 minutes ‘til I break fast and after much consideration I think I’m gonna enjoy some (a lot of) cuties (mandarins). I thought the morning would be a bit difficult being that I was already on an empty stomach, but in true nature I was good. I can feel the emptiness in my stomach and can probably spot an ab or two if I look hard enough, but that’s not what this is about.

I’m competitive by nature and so being able to say I completed this 36 water fast after saying I was going to was important to me. I’m a woman of my word and while it’s easy to let ourselves down more often than none, I refused. I’m guilty of skippy occasional workouts, eating a carb after vowing to give it up for a week—whatever. Not today Satan. And so while I pen this stuff down as a means to keep myself occupied and inspired, I also write this to let you know that YOU GOT THIS. Whatever it is. Whatever it is you say you want to do, are going to do; whatever you put your mind to—you fucking got this! Pardon my French. But, you get the point.

If you’ve made it this far, I’d like to re-introduce you to your resilience.. And I’ll let you in on a secret. Sometimes, it’s during our weakest moments that our true strength is born. So keep on fighting, but most importantly keep on failing and trying again. Remember that today we are stronger than we were yesterday, not because we lifted a weight or ran six miles, but because we chose to be. So I urge you to make the choice today, tomorrow and the day after that.

I’ve included a few benefits and risks below that come from water fasting. Please consult your healthcare provider or a holistic expert prior to fasting if you have a history of medical conditions or questions.

Autophagy is a process in which old parts of your cells are broken down and recycled.

Several animal studies suggest that autophagy may help protect against diseases like cancer, Alzheimer’s, and heart disease. For example, autophagy may prevent damaged parts of your cells from accumulating, which is a risk factor for many cancers. This may help prevent cancer cells from growing .

In one study, 68 people who had borderline high blood pressure water fasted for nearly 14 days under medical supervision.

At the end of the fast, 82% of people saw their blood pressure fall to healthy levels (120/80 mmHg or less). Additionally, the average drop in blood pressure was 20 mmHg for systolic (the upper value) and 7 mmHg for diastolic (the lower value), which is significant.

May improve insulin and leptin sensitivity

May lower the risk of several chronic diseases

There is some evidence that water fasting may lower the risk of chronic diseases like diabetes, cancer, and heart disease.

In one study, 30 healthy adults followed a water fast for 24 hours. After the fast, they had significantly lower blood levels of cholesterol and triglycerides — two risk factors for heart disease

Although a water fast is relatively short, there are a few conditions that may be aggravated by water fasting.

People with the following medical conditions should not water fast without first seeking advice from their healthcare provider:

Back to Mental Wealth